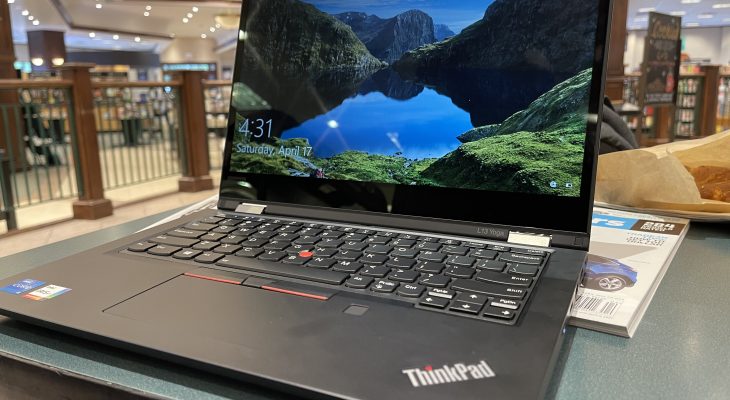 The ThinkPad brand of laptops have a lot choices in it’s lineup, few are a versatile as the Thinkpad L13 Yoga Gen 2. It’s Jack of all Trades feature set turns out to be both the gift and curse of this unassuming, unitarian laptop.

Traditional, Classic ThinkPad design is what you get here, Lenovo doesn’t deviate from the norm. One unique feature of the L13, are the two metal hinges that allow the screen and base to rotate the laptop 360-degrees into tablet mode – making it an official 2-in-1. The entire body is aluminum, adding the allure and premium feel of the Yoga brand – without losing any of the popular features ThinkPads are known for. The spacious key-travel, signature red-knob (Trackpoint) navigation, and IT-centric security tools are all on board.

The specs of the L13 Yoga justifies the slight bulkiness of the chassis, but that thinkness is only compared to the other Yoga laptops and the ThinkPad X1 Nano and X1 Carbon. It’s much more compact and travel friendly than a Legion laptop or the other ThinkPads.

Connectivity options galore, the L13 Yoga is one Thinkpad that lives up to its brand name and doesn’t sacrifice ports for modern functionality. Two full-sized USB-A ports, two USB Type-C ports (one is 4.0 Thunderbolt), an HDMI port, and a MicroSD Card slot are all on board. The metal 360-hinge gives this Thinkpad its 2-in-1 superpowers, making it one of the most versatile laptops on the market and deeming it worthy to carry the Yoga branding.

The ThinkPad Pen Pro is tucked away for when the time demands, like taking a quick note or precision is needed for an illustration or presentation. While the stylus could use a bit more width, it’s full-size length and the programmable two-buttons adds a much-needed improvement over the smaller ones included with Lenovo’s Yoga-branded devices. It also has a fingerprint reader and is Windows-Hello enabled, for a Face-ID type unlocking feature.

The ThinkPad L13 Yoga isn’t the thinnest or prettiest Thinkpad or Yoga device available, but it surely is one of the most well-rounded. Combining the business capabilities of the ThinkPad with the agility and future-proof features of the Yoga has reached a refined state in this 2nd Gen hybrid device. Depending on what you’re looking for, this could either be a ThinkPad that gains the features of the Yoga or a Yoga that loses some of it’s design edge for the office ready tools of the ThinkPad.