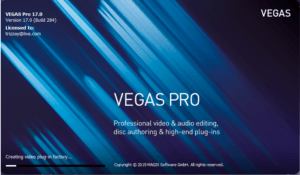 I literally filmed and edited a music video in 48 hours using Magix Vegas Pro. Well, I still have color grading and layover effects to apply to the project so it’s not totally done. But the point is, I took three takes and one B-Roll and edited the takes to a final edit- that was to the artists and his teams satisfaction. I don’t think I could have worked as fast and efficient in another NLE as I did in Magix Vegas Pro.

Vegas Pro is a Non-Linear Editor similar to Adobe Premier Pro, Avid Media Composer and Apple Final Cut Pro. Created by Sonic Foundry in 1999 as a Digital Audio Workstation, Vegas was bought by Sony in 2003, who then sold it to Magix in 2016 – who has continued developing and supporting the software ever since. And MAGIX has done just that with the newly released Vegas Post, which includes Vegas Pro 17, Vegas Effects, and Vegas Image – that brings the Vegas brand to a whole another level of video editing post-production. This is Vegas Pro 17.

Vegas Pro uses a traditional NLE interface and with a few tweaks that allow for a quicker workflow and faster than usual turn around. It’s user interface consists of the traditional NLE timeline, the video preview screen and browser which contains multiple tabs. Vegas’ browser tabs contains extra views for the media in your projects timeline, the Explorer for bringing media into your project, and lastly the transitions, video fx, media generators and project notes tabs for authoring your content.

Aside of it’s $599 price tag, Vegas Pro 17 can also be purchased by subscription, for $16.67 a month.To show off the features of what I feel is the best NLE on the market, I’ve included a short video to demonstrate the power of Magix Vegas Pro. Check it out below:

Having been a Vegas user since before Sony bought the brand from Sonic Foundry, and a user of multiple tiers of the program (Vegas Movie Studio, Vegas Edit,Vegas Pro,etc.) – I like that Magix (the company behind Video Pro X, Samplitude, and Sequoia) has taken the brand by the reins. Magix has already introduced innovations in the all-in Vegas Post suite, which contains two new programs – Vegas Effects and Vegas Image, going straight for the jugular of Premiere Pro, After Effects and Photoshop – Adobe’s triad of image editing and filmmaking software.

Add to the fact that Vegas Pro is already a very capable, self contained program with a video engine that handles visual media the same way Acid handles audio loops, an architecture that doesn’t just handle Alien Skin, ProDAD and Boris FX plug-ins; Buy Vegas can also utilize VSTs effects to spice up your film’s audio as well. It doesn’t take the next Lucas or Spielberg to see that Vegas going to get even better with time.

Not that it wasn’t already good enough. In a industry where more popular NLEs like Adobe Premiere, Final Cut, Media Composer and even Davinci Resolve may be standard in the post-production studios of Hollywood- Magix Vegas Pro remains one of the best kept secrets of film editors and post producers for now. Though I doubt it will remain on the cusp of obscurity and being a household brand for much longer. It’s unique way for handling video files and cutting-edge feature set demands otherwise.

Support Real News: Subscribe or visit our merch shop and check out our new brand for comfort wear, LBFQ.
Shop